LSA stand for the Link State Advertisement, Open Shortest Path First (OSPF) is a link-state routing protocol used to find the best path between source and destination routers using its own shortest path first (SPF) algorithm. OSPF routers exchange LSAs to update and maintain the topological OSPF database by the devices operating OSPF but to first understand the types of LSAs, we have to first understand about the roles of routers in OSPF.

Internal Router – An internal router is a router that has all its interfaces in the same area.

Area Boundary Router (ABR) – The router that connects the backbone area to another area is called an area boundary router. ABRs therefore maintain multiple link-state databases that describe both the backbone topology and the topology of other regions.

Autonomous System Border Router (ASBR) - When the OSPF router is connected to another protocol such as EIGRP, or Border Gateway Protocol, or any other routing protocol it is known as AS. Router that connects two different AS (in which one interface is operating OSPF in area 0) is known as Autonomous System Border Router. These routers redistribute. ASBRs run both OSPF and other routing protocols, such as RIP or BGP. 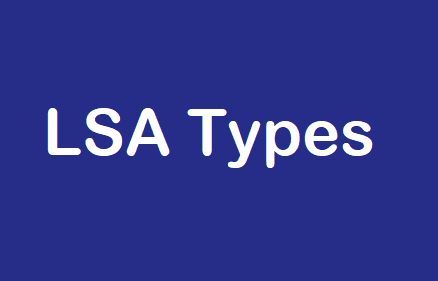 There are different types of LSA interchanges depending on the regions in which the equipment operating the OSPF resides.

Type-1 (Router Link Ad) - This is a Type-1 LSA exchanged by routers that belong to the same region. Router contains link status, router I'd, IP information and current interface status. If a router is connected to multiple regions then separate Type 1 LSAs are exchanged.

Type-3 (summary LSA) - This is a type-3 LSA that is produced by the ABR in areas other than the areas where it lives. ABRs are then injected into the backbone region to a topological database derived from other regions. This includes the IP information of the ABR and the router I is advertising these LSAs.

Type-4 (summary ASBR LSA) - ABR sends these Type 4 LSAs to an area other than the region in which they originate. These LSAs are generated by the ABR to route the ASBR to others.

Type-5 AS External Link Advertisements – These are generated by the LSA ASBR to advertise autonomous system routes other than OSPF.