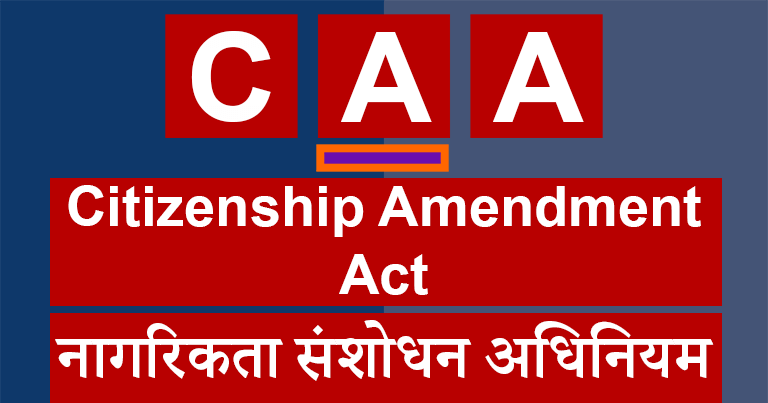 The full form of CAA is Citizenship Amendment Act, According to this law, citizens of minority communities of six religions from three neighboring countries - Pakistan, Bangladesh and Afghanistan - will be granted permanent citizenship of India by India. In which- people of Hindu, Sikh, Christian, Jain, Parsi and Buddha religions were included. Under the CAA Act, some new provisions have been prepared for taking Indian citizenship by refugees who have taken refuge in the country. According to the CAA Act, minorities of Indian origin being persecuted in three Islamic countries Pakistan, Bangladesh and Afghanistan will be brought to India and given Indian citizenship.

Who are illegal migrants?

According to the Citizenship Act, 1955, illegal migrants cannot get Indian citizenship. Under this law, those people are considered illegal migrants who have entered India without valid travel documents like passport and visa or have come to India with valid documents but stay here for more than the period specified therein.

What is the provision for illegal migrants?

Illegal migrants can either be kept in jail or can be deported back to their country under the Foreigners Act, 1946 and the Passport (Entry into India) Act, 1920. But in the years 2015 and 2016, by amending the above laws of 1946 and 1920, Hindus, Sikhs, Buddhists, Jains, Parsis and Christians from Afghanistan, Bangladesh and Pakistan have been exempted. This means that people belonging to these religions can neither be imprisoned nor deported if they live in India without valid documents. This exemption is available to those of the above religious group who have arrived in India on or before December 31, 2014. The Citizenship Amendment Bill, 2016 was introduced in Parliament to amend the Citizenship Act, 1955 to make people belonging to these religious groups eligible for citizenship of India.

What happened to the bill?

The Bill was introduced in the Lok Sabha on 19 July 2016 and referred to the Joint Parliamentary Committee on 12 August 2016. The committee submitted its report on January 7, 2019. After that the bill was passed in the Lok Sabha on the next day i.e. January 8, 2019. But at that time this bill could not be introduced in the Rajya Sabha. The government is preparing to introduce this bill again in the winter session. Now again this law will be made only after it is passed by both the houses of the Parliament.

Then why the need to get it passed by both the houses?